Hello and welcome to my shrine for the russian pop duo t.A.T.u.

t.A.T.u. blew up in the US in 2002, with their single "All The Things She Said". The duo was made up of Lena Katina and Yulia Volkova. They were largely known for the image they portrayed of two women in love. Currently, t.A.T.u. is disbanded.

t.A.T.u. was the vision of Ivan Shapovalov, who was producing and directing a children's group named Neposedy. Yulia and Lena were members of Neposedy but left at fourteen when t.A.T.u. debuted.

The group released albums in Russian and English. Their sound can be described as upbeat electronic pop with some rock thrown in sometimes. Many of their lyrics touch upon homosexuality and forbidden love.

t.A.T.u.'s music and image resonated both with LGBT youth and men who enjoy fantasizing about lesbians. My own experience in the fandom confirmed the latter, but more on that later.

Aside from the controversy of ~being lesbians~, many often questioned the genuinity of the relationship between Lena and Yulia. It was suspected that the 'lesbian' image was just something tacked on by their sleazy producer to sell more albums.

In the beginning, both girls denied that their love was anything but genuine. In a 2003 interview, Yulia confirmed "Yes, we are girlfriends with each other." Lena added, "We don't have to convince anyone."

Later that year, a Russian documentary came out called The Anatomy of t.A.T.u. The documentary seemed to heavily imply the girls were not really lesbians, although this conflicted with what they said in interviews. The following year, it was announced Yulia got pregnant (by an older man with a wife and daughter). Then, in an interview they gave before the release of their third studio album Dangerous and Moving. Lena remarked "Our first video was about love between two girls. We do not pretend to be lesbians — we’ve never said we were."

It should be noted that both girls joined t.A.T.u. at a very young age. Many of the group's decisions were most likely up to management and marketing, not to the girls themselves.

After the release of their third album in 2005, t.A.T.u. started to fade from popularity, but continued to release music. They would release their final album in 2009. In 2011 the duo officially split.

Despite the split, there have been a few events during which the girls came together to perform as t.A.T.u. again, such as the 2014 Winter Olymptics. Unfortunately, they had a falling out shortly after.

Later in 2014, Yulia made headlines when she was asked if she would condemn her son for being gay. She responded, "Yes, I would condemn him. I believe that a real man must be a real man, a man has no right to be a fag." which directly conflicts with all of the 'love who you want' vibe of the duo. She has followed up saying "Two girls together—not the same thing as two men together. It seems to me that lesbians look aesthetically much nicer..." (not much better) and that she is not "against" gays and they are "better than murderers, thieves, or drug addicts".

Their last performance was in 2019 to mark the 25th anniversary of their original children's group Neposedy. They have not performed together since.

Where are they now?

Lena has branched off on her own and released her debut album in 2014. She continues to make music today. Her music is available on most major streaming services.

Yulia was diagnosed with thyroid cancer and had to undergo a complex surgery which severed her laryngeal nerve, causing her to lose her voice. Aside from the fact she got a lot of work done, not much else is available about her recent activity.

My connection to t.A.T.u.

The first time I discovered t.A.T.u., I was 10 years old and watching MTV. Their music video for “All The Things She Said” came on and I was obsessed. The next time it came on the radio, I recorded it onto a cassette tape so I could listen to it all of the time.

When I was 11, I joined my first web forum, tatu.us. Some of my old posts are still there! I became increasingly active in the ‘t.A.T.u. fanbase’, even though I was basically still a child.

I met a lot of interesting people on that forum from all over the world. There were a lot of older men on this forum. They mostly wrote fanfiction - thinly-veiled lesbian erotica (about teenage pop stars).

Although band!fic is ethically questionable, writing about t.A.T.u. was one of my first forays into writing (non-erotic) fanfiction. The forum had a very active fanfiction community and I dreamed of putting together intricate stories that held chapters and chapters of stories about forbidden angsty love. At one point I created a (cringy) website to showcase one of my first t.A.T.u. fanfictions. 11-year-old-me thought it would be such a cool and unique idea to overlay my Comic Sans text over a background image. I even chose Papyrus as my title text - it still exists!

At the time, there was a very famous long and well-written t.A.T.u. fanfiction called "Going Mad". It had its own website and everything. It was based on the music video for "All The Things She Said" and detailed the girls running away from home to be together. The website has been taken down but it's still available via Archive.org. I'm not ashamed to admit I meticulously copied and pasted every chapter (and probably printed it at school, tbh) so I could read it offline.

I was so intrigued by t.A.T.u. and their music that I determined (but ultimately failed) to learn Russian, so I could understand their interviews and Russian lyrics. I think I quit when I realized I couldn't map each cyrillic letter to a letter of our alphabet and decode the language like a key.

A lot of t.A.T.u.'s music was largely unavailable to me due to it being released in Russia. I hadn't yet learned how to pirate music. On a trip to a farm with a family friend, we spoke with someone who lived there who kindly downloaded their entire russian discography and burnt it to a CD for me. I was ecstatic, although I'll never forget the weird and disgusted looks on the faces of my classmates as I proudly showed them my russian pop techno.

Because of my interest in t.A.T.u., I taught myself how to make graphics to express my appreciation. I still have some of the originals, featured in the section at the bottom of this page.

I followed along with t.A.T.u. throughout their career, even when they fell in popularity. I associate their songs with particular times of my life.

Some of my favorite songs include "Klouny", "Malchik Gay", "Doschitai Do Sta" and of course, "All The Things She Said. 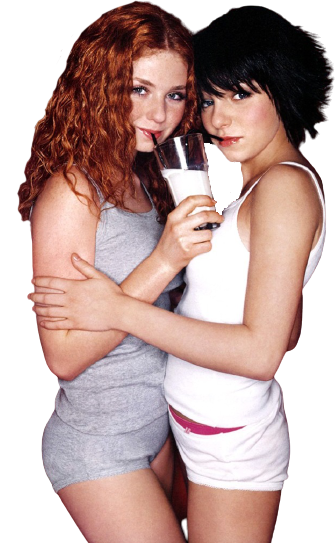 The novel is a collection of text messages detailing a love story between two young women who meet on a t.A.T.u. fansite and fall for each other.

I've read a translation of the original book and I watched the movie, they're pretty alright. Here's where it gets weird:

The novel was written by some right-wing Russian politician who probably has no business writing borderline erotica about teenage lesbians. I mean, check out the cover: